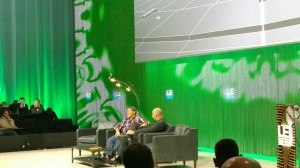 For the first time, Guy Kawasaki has made it to the LeWeb stage. Fortunately, Loïc and Guy reached an agreement that he is going to be back next year. And that is a good thing as this session had great content and it also as a great laugh.
Guy looked back on the past 10 years and said that back then everyone said that myspace was going to be the operating system of the internet. And some 7 or 8 years ago nobody really thought we needed twitter. In fact, I personally remember a conversation I had with some Dutch early adopters back in 2008 when we said that Twitter was probably not going to be there in three years time. And as Loïc and Guy reminded everyone, Twitter is worth about 20 billion. And Guy went on saying that if we would look at his past at Apple, who would have thought that they would have become the most valuable company in the world. It is really hard to predict the future. That is hard for the next 10 monts, but impossible to do for the next 10 years.

Guy feels that Bitcoin is a lovely idea. Even if for nothing else than that it is completely outside of the grasp of Goldman Sachs. There have been people questioning the Bitcoin because it can be used to fund illegal things as it is not traceable. However, Guy says that there are a lot of technologies that are coming up that will be enabling that. And they will have a balance where some of what they are used for will be for good, and some will be used for bad things. But all of that technology is important to have as that helps us grow and develop new things. And sometimes it can even evolve from something that starts without control and evolves into something that grows something that goes into a control situation. It is when we started with Napster which grew into a movement which has then helped a whole new industry grow. Including iTunes which is very controlled.

Loïc triggers the social media card stating that Guy is a social media powerhouse. Guy answers that his approach is very different from most ‘experts’. And he adds that he uses the term experts very lightly. Social media for Guy is a means to an end. He is not looking to make more friends and more relationships. He says that he has a wife and four kids and that is enough for him. He is not looking to meet new people and have more friends. Social media for Guy is about building a platform. He has embraced the public radio model. At NPR they provide great content 365 days a year and then they gain the privilege to run the telethon once a year. So, his model is to constantly provide great content. He also has a team constantly curating great content, so that he is constantly able to provide his followers with great content. And that also gives him the opportunity to run the Guy Kawasaki telethon, because he has earned the right to do that. That is why he is constantly sharing great content, so that when he publishes a book, he has gained the right to promote his book. Or a new Evernote function as he is an advisor to Evernote. He does read all the interactions and every response from the account is done by him himself. Nobody on the team does that. Guy also repeats all of his tweets four times eight hours apart. The reason for that is that he does not believe that everybody is going to be awake and looking at Twitter at the moment a tweet is posted. Plus, he is not assuming that people are going to be scrolling back through their timelines to find that one awesome tweet. And even though that might piss people off, his reasoning is that if you are not pissing off people on social media, you are not using it hard enough. Also, he has found that posting a tweet with a link four times, really does deliver four times the clicks. He is not using different links for those four links as people rarely see that same tweet and that same link twice. And with a smile he adds that if you see that same link more than once, you probably do not have a life.

Loïc asks Guy to share some tips on entrepreneurship with the audience. He believes that the most important thing an entrepreneur can do, is to make a prototype. If you build a prototype you may never have to prepare a pitch, powerpoint deck or a projection. Because at a pitch, everyone everyone says is that they are going to be doing 100 million in 5 years. If you say you will do 500 million investors feel like you are overestimating yourself and if you are saying you will do 25 million, they think they do not take yourself serious. So, the best thing you can ever do with an investor is to show them a demo that is already in use with actual users and signup numbers. His second tip is that the challenge for European entrepreneurs is to create a product or service that is so good that American entrepreneurs want to copy it. Not to make your own local version of a great American service, but to create something awesome yourself. And there are a few European startups that have made that status like Soundcloud or Spotify. The fun part was that then Loïc took this as an insult to European entrepreneurs where he felt that Guy was saying that European startups just copy American startups. Where Guy is just saying to look beyond the Americans and paying a compliment to the companies that did just that and are defining the playing field they operate in. And his third advice to businesses is to never ask anyone to do something that you would not do yourself. Because that will never work.

Guy shared that the richest vein for Sequoia investment is two guys of girls building something in a garage that are building something they want to use. That is very different from people that build something from a business point of view to earn money. Again, I personally agree with that and that has been a point I have been pushing since 2008. If you want to build a startup, make it something that you want to use yourself and that addresses a problem that you have yourself. If you are just doing it for the money, you will have a hard time making it.

A guy from the audience asked Guy what he thinks about an investor offering to invest money if the startups would move to their area. And Guy said that if this would be the decisive factor on whether or not you can get the investment, they ought to drop the investor and find another investor that will work with them However, he does offer a middle ground where you keep your developers local, create a Delaware corporation and a west coast head office in Silicon Valley. Because it allows you to have the best of both worlds for both parties as investors do not really want to fly for 11 hours for a board meeting. And that is a factor for Guy himself as well. He is not specifically looking for opportunities that are far away. His statement literally was “why fly 30 hours to loose money there, when you can loose the same amount of money closer to home”. Mich Atagana came back to that statement and asked Guy whether he thought that not investing further away from your home town is a potential for lost opportunity? Guy agrees, but from the investors perspective it is a slightly different issue. They do not know a thing about the financial laws for investments or IPO’s and then the board meetings are 30 hours away. That is just throwing up speed bumps while you are the one looking for investment. But he does agree with Mich that the next Google might be in South Africa for instance and an American investor would not know about it.