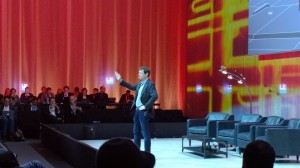 Fred Wilson is kicking off the talks at LeWeb. As a VC he is sharing the way in which he is looking at opportunites and how their firm chooses what to invest in. His first statment is one that I absolutely agree on. If you have ready the post I wrote before LeWeb, you will see that I wrote about the fact that I said that society changing is much more important for the next 10 years in technology than the actual technological developments are. And Fred came out and says that they do not think in technologies, but they think in trends. Tech is important, but to him trends in behaviour and society are a lot more important to base their choices on.

The first big macro trend Fred talks about is the move from burocratic hierarchies towards technology driven networks. It is no longer about the hierarchical structure. It is no longer about one person at the top making the decision, then feeding that down through the pyramid to wait for feedback to come back up to help him make more decisions. For a long time, that actually used to be the most efficient way to work. But now we see technology driven networks replace those hierarchies. As an example, Twitter replaces the newspaper. A newspaper is a very bureaucratic product. The content is decided upon by the chief editor of the paper and he filters and decides the content of the things you are reading. That makes it a slow process to produce the news and it also filtered based on the prerferences of the ediitor. And then you have Twitter that allows networks to decide what the news is based on the people they follow, the retweets they do and the way they interact with messages that make it news. News is created by the interest of the crowd and at great speed. The first place we have seen this was in the field of media. But we now see it in hotels with Airbnb and others. We see it with Kickstarter and others. It is in learning with Codecademy and others.

The second big megatrend Fred names is unbundeling. It is a bit about the first trend, but it is even more about how products and services are delivered. In the traditional world, it was expensive to get things packaged up and delivered. But now we are unbundeling that and you can buy products that are much more focussed on what you need. And you pay just for the things you need or want. The product is usually better as well, as it is created and provided to you by people that are doing the things they are best at. Which means that you get the economic news from the guys that specialize in economic news. Or the sports news from the people that are specialized in sports news.
Fred also names the banks as one of the examples of this. And I completely agree with him on that. In fact, back in 2009 I was on a table with a number of bankers in Zürich, Switzerland with a number of bankers and they stated that we would never be able to do without the banks. And at the time I told them that we could if we were to pick separate banking functions from separate startups through the internet. At the time they thought that I was kidding. And now Fred Wilson also states that the unbundeling of banking services has started. You used to go to a bank and then get everything from that single bank. Now you might do international payments through PayPal, get money for a project through Kickstater etcetera. You can now pick parts of what the bank has been providing you as a complete service from other service providers. The same goes for education where you no longer need to have the building and all the equipment for research, but you can also bring those things together from various sources and get to a better result than you could have before.

The third trend is that we are all nodes on the network. We are all connected to each other all of the time through our smartphones. Look at Uber where we are a node on the network and so is the driver. You can connect together and get a ride. Or get transportation. And that will change the way things and people are going to be transported in the future. And that is the same thing with many new services.

Fred obviously sees more opportunities. One of them is on money and new money systems like Bitcoin. Another opportunity will be the way devices are going to monitor our health and wellness and change the way in which we live our lives and improve on our health. Another opportunity is in big data. However, Fred has a very different angle than what we would normally hear. Fred calls big data the pollution of the information age. Our data leakage through online services is also what allows organisations to spy on us. And as trust and identity are big things, or at least should be, this is something that we ought to be aware of. If we would have realized at the start of the industrial revolution that polution would cause so much damage, we would have addressed it from the start. Yet we are allowing Twitter and Facebook our identity services on many other services. We are allowing data leakage that way. So Fred sees a huge opportunity for a identity system that is set up in the same way that Bitcoin has been set up. Not controlled by anyone, but a place where we are the one that controls our own identity and the related data. He has not seen that solution yet, but he is looking forward to finding it.